My urge to knit small furry animals has continued... as has my urge to share it! 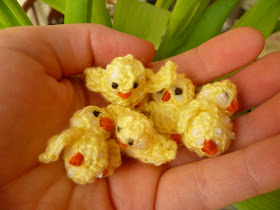 Here is a pattern for these cute little baby chicks. They can be used either as babies in a nest with chocolate eggs, or as hanging decorations for some easter branches.


Sew side seams, and turn inside out. Stuffing this small tube is quite fiddly! But at least it's small. When it is stuffed, sew the bottom seam.
Then, to make the head, tie a piece of yellow yarn around the middle of the chick where the decreases are, and pull it tight. Tie into a double knot, and thread the ends through the middle of the body to hide them before cutting.


To use as a hanging decoration, simply thread some cotton or embroidery silk through the top of the chick's head (it's ok, it doesn't hurt!)
Amy, the Greedy Crocodile at 04:04
Share